Performing art chair was established by Erik Alalooga in 2010 through reorganizing interdisciplinary art chair of Estonian Art Academy. Performing art studies took a clear focus to use of natural sciences and technological expressions as a important part of creation and performing process. Regrettably it remained a short, but uncompromising and unprecedented experiment in academical field. During only three academic years surprisingly lot of dividends have been taken out which promise to influence art world soon. New way of exploring and handling of experimental music, based on scientific principles. Postinstrumentum is a name of sound-performance group. But as well it is a common title of larger phenomenon of exploring acoustical potential of matter and transforming air-waves into brain signals of listener. MA thesis of the same topics will be evaluated in spring 2014. So musical mixture of analog and digital technology will reach into scientific level.  /postinstrumentum.wordpress.com/

Another significant result of performing art studies has been a concentration of theoretical discussions but as well networking process of technological performance/performers. Roots of conception of technological performance go back to the very end of XX century when group of artists started to define relationships between physical action, dramaturgical structure and technology. Technological theatre didn’t handle technology any more neither as supporting, background force of conceptual idea nor as a illustrator of brainwork. Technology was started to treat as dominating character, a main role of performance. As a subject not just as an object. Technological theatre started to explore inner rhythms of machine. Machine with its technical character and anatomy became a base of dramaturgical structure. Hibernating meanwhile it raised into spotlight again in 2009, when i first met cultural theorist and inventor of theory of technological theater Andrus Laansalu. Since then our beloved topics is in sharp focus again with title technological performance. These principles invited a new partner into art-process – an error. So far treated as an enemy, error became a positive manifestation of hidden potential of a machine. 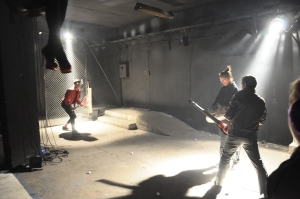 First MA thesis in technological performance were evaluated this spring. 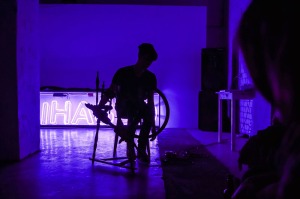 From 2013 PERFORMACHINE will reflect activities and exploration of technological performance and experimental music by people close to us.